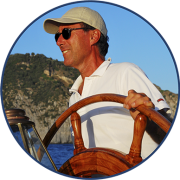 Andrea is Whitefin’s Captain. He  was born in Padova – Italy 58 years ago. He started sailing at the age of 11 years on his familiy’s boats. He graduated in mechanical engineering at the University of Padua and was industry director for many years before devoting himself full time to boating. He has always spent his free time sailing, especially in regattas , obtaining more than 80 trophies in all national and international sailing classes. With more than 50,000 miles sailing in the Mediterranean sea, he knows in detail coasts and harbors of Italy, Croatia and Greece, the destinations proposed for Whitefin cruises.

He has a sunny and sociable character, always ready to engage guests and friends in the art of navigating. Sailing enthusiasts with Andrea will learn all the techniques of sailing and will be ready to face the experience of racing perhaps even on board Whitefin.

He plays the guitar and loves all motorsports. In his spare time he practices motorbike off-road, skiing and gardening. He is very dynamic and you will find him always busy in many activities. 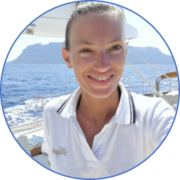 Vittoria is the chef of Whitefin. She was born in Bologna and she is 32 years old. She has been travelling by land and sea all over the world during the last decade so she can fluently speak English, Spanish, Polish, some French and her mother language Italian.

She has gained her experience as a cook on board in Polynesia, New Zealand, and the Mediterranean Sea. On Whitefin she takes care of the guests from breakfast to dinner. She loves preparing delicious gourmet snacks always fresh and colourful, rich and delicious appetizers, and most of all the Mediterranean cuisine with seafood,  meat, fresh local ingredients, fresh vegetables, and fruits proposed in different combinations.

Vittoria loves living in harmony with nature and she practices Yoga every morning for herself or with her shipmates. 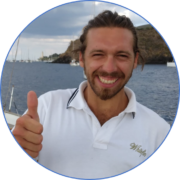 Pietro was born in 1993 in Alessandria where he lives with his parents.  He has been a deckhand on Whitefin for the last two seasons. He is an expert seafarer with 12 years of experience on several sailing yachts on different Oceans.

Pietro is a very dynamic person with a sunny and sociable character. He is a perfect team member always ready to support and assist colleagues and guests. He also has excellent skills in the service of the guests that he gained in his family’s restaurant.

He likes music and plays piano and drums. Further, he likes travelling and practices several sports including rugby, soccer, climbing and skiing.

Pietro’s mother tongue is Italian. Additionally, he speaks fluently English and some French and Spanish.

Alessandro is 26 years old. He was born in Pisa, where he lives and studies at the university. His academic career led him to study for some time in Portugal, in the beautiful city of Aveiro.

He started sailing small dinghies at the age of 8. In recent years, he has spent more time at sea as a stable crew member on several boats, in both racing and cruising.

He has always been a sports enthusiast. Since high school, he has practised sports at a competitive level such as athletics and rowing.

In recent years, he has travelled to various parts of the world, often trekking in nature.

He loves to meet other cultures, different kind of people and explore the world. In his spare time, he volunteers in an association for international students.

He has a patient and kind character and likes to play with children.

His mother tongue is Italian. In addition, he is fluent in English and has a basic level of French, Spanish and Portuguese.